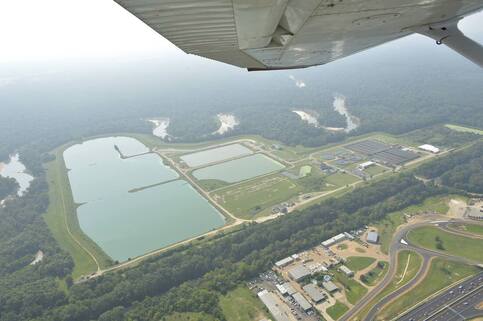 "The City owns and operates three wastewater treatment facilities, plus numerous interceptor and collector sewers throughout the metropolitan area, and provides sewer services to the City and parts of Hinds County, western Rankin County and eastern Madison County.

The primary wastewater treatment facility, Savanna Plant, has a 46 million gallons per day (“mgd”) permitted capacity and was placed in operation in 1975.

The second wastewater treatment facility is located in the vicinity of the Greater Jackson South Jackson Industrial Park for treatment of wastewater flows from the Trahon and Big Creek Basins, which is an oxidation ditch design plant that began operation in 1991, and which has a capacity of 4.5 mgd with an average daily flow of 2.1 mgd.

The third treatment facility is located in the Presidential Hills subdivision in the northwest part of the City. The facility provides treatment of treatment of wastewater flows from Bogue Chitto Creek Basin. The facility consists of an influent pump station, aerated primary lagoon, polishing lagoon, filters, and chlorination/dechlorination facilities that began operation in the early 1970’s and which has a capacity of 0.75 mgd with an average daily flow of 0.3 mgd.

In November 2012, the Jackson City Council entered into a consent decree with the EPA and MDEQ regarding operations at the Savanna Street Wastewater Treatment Plant.  Negotiations had been ongoing for over 2 years.  According to MS Business Journal: "The city of Jackson released more than 2.8 billion gallons of minimally treated sewage-enough to fill four NFL stadiums-into the Pearl River system over the last four years."  The consent decree required the City to pay a civil penalty of $437,916, execute a $875,000 environmental project, and overhaul its wastewater treatment plant and collection systems.  The City was given 18 years to fully comply, with the vast majority of the work to be completed within the next 11 years  (by 2023).

In April 2015, MDEQ issued a NPDES wastewater permit to the West Rankin Utility Authority (WRUA), allowing it to disconnect from the Savannah Street WWTP and build its own treatment facility.  WRUA, which provides water and sewer service to customers in Rankin County, pays the City an average of $5 million for the cost of treating wastewater at the Savannah Street plant.  In Sept 2015, the City appealed MDEQ's decision to grant a  permit to WRUA and the lawsuit to the Mississippi Supreme Court.  The City argued that the permit would constitute an unnecessary expense for all of the Savannah Street customers and would degrade water quality in the Pearl River.  At a Dec 2018 City Council meeting, Public Works Director, Bob Miller suggested that the City drop the lawsuit and enter into new discussions with the WRUA.
​
Consent Decree Funding​
Water Quality Monitoring Program

The consent decree-required Water Quality Monitoring Program was submitted to the EPA on August 4, 2017 and was approved on December 4, 2017.  "The Program is one component of the City's overall approach to identify and abate illicit wastewater discharges into waterways that may occur from sanitary sewer leaks or overflows.  Data from the monitoring program will provide information required to implement necessary corrective actions and to help protect water quality within the City's urban creeks and the Pearl River."

According to the WQMP document, the City intends to merge the WQMP with the MS4 Monitoring Program.

According to the most recent City of Jackson Semi-Annual Report (March 2018-August 2018) on the status of the WQMP, "no activities were performed within this reporting period due to lack of available funds and staffing resource limitations," Work activities anticipated during the next reporting period: "No activity is planned to implement the City's Water Quality Monitoring Program due to revenue limitations."

Water Quality in the "Jackson Section"

MDEQ releases a biennial Section 305 (b) report on the results of their ongoing state-wide water quality assessments.   The 305 (b) report is used to develop a list of the state's impaired waterbodies as required by Section 303 (d) of the Clean Water Act.  After a waterbody section is listed on the 303 (d) list, a TMDL (Total Maximum Daily Load) is created to develop strategies for improving water quality and restoring a waterbodies designated use.

Section 305 (b) reports for the "Jackson Section"
As noted in the 2014 Section 305(b) Report, water quality data indicates that the entire Jackson Segment of the Pearl River (Water Body ID MSUMPRLR1E) was not meeting its intended uses (i.e., primary contact or secondary contact/aquatic life support).

In 1996, the entire section of the Pearl River from Ross Barnett Reservoir to confluence with the Strong River, was placed on the the Section 303 (d) list of impaired water bodies due to nutrients/organic enrichment and low dissolved oxygen.  A TMDL for nutrients, measured as nitrogen and phosphorous, was completed in May 2009 for the entire Pearl River.  The "Jackson Segment" was reevaluated for nutrients and a TMDL issued in April 2015.  Recommended action in 2009 TMDL was 56% reduction of total phosphorus.  Recommended action in 2015 TMDL for Pearl River from Ross Barnett Reservoir to Strong River is 70% reduction of total phosphorus.
​
Clean Water Act Compliance

In a letter to MDEQ dated April 16, 2015, EPA acknowledged, “that a substantial portion of the existing nutrient pollutant load is due to frequent bypasses, leaking sewer pipes and sludge deposits in the Pearl River associated with the City of Jackson wastewater treatment facility."

According to the City of Jackson Quarterly Reports, there were 180 separate collection system Sanitary System Overflows (SSO) that released over 5.9 million gallons of untreated sewage to the Pearl River and its urban creeks in 2018:
In 2018, in addition to collection system SSO, prohibited bypasses directly from the Savanna Street WWTP released 3.2 billion gallons directly to the Pearl River.  This discharge would fill 4,000 Olympic swimming pools or 4 NFL stadiums :
2019

According to the City of Jackson Quarterly Reports, so far in 2019, there have been 65 separate collection system Sanitary System Overflows (SSO) that released over 23.6 million gallons of untreated sewage to the Pearl River and its urban creeks.  In the first quarter  2019, raw sewage released from the West Bank Interceptor line alone totaled 23 million gallons, 4 times the total amount of raw sewage released during the entire year of 2018.  Untreated sewage has flowed into most of the Jackson creeks that lead to the Pearl River, including Town, Eubanks, Belhaven, Lynch, Hanging Moss, Eastover and others.​
According to the 2019 first quarterly report, there has been an ongoing "Prohibited Bypass" at the Savanna Street Wastewater Treatment Plant since Dec 9, 2018.  A "Prohibited Bypass" occurs when the plant is overwhelmed with excessive flow, usually due to high rain events, and bypasses must occur.  "All bypassed volume is chlorinated, de-chlorinated and required samples taken prior to blending with the mechanical plant effluent and subsequently discharged to the Pearl River".  As of the end of the first quarter reporting period, 2.47 billion gallons of minimally treated sewage has been discharged to the Pearl River.
​
Public Notification Procedure - Sewage Overflow Response Plan

According to City of Jackson Sewer Overflow Response Plan, City of Jackson will issue a news release and place temporary signs in the area of the overflow whenever an overflow creates a "significant health hazard" or "significant volume has reached waters of the US and/or State".  Additional notification will be considered in conjunction with MDEQ and HCHD.

On May 16, 2019, MDEQ issued a Water Contact Advisory for Pearl and Other Streams in the Jackson area.  The advisory covers "the section of the Pearl River from its confluence with Hanging Moss Creek to the Swinging Bridge in Bryam.  Advisories are also issued for Hanging Moss Creek, Town Creek, Lynch Creek, Eubanks Creek, Hardy Creek, and Trahon Creek.  Also included is Tilda Slough which is along the south side of Pascagoula Street and east of Jefferson Street (parallel to Pascagoula Street) that flows through an underground culvert then emerges at I-55 near the Pearl Street exit.  This slough drains north under High Street where it is pumped to the Pearl River."  On June 4, 2019, the Water Contact Advisory was revised to include "Big Creek and Belhaven Creek, including a sandbar called “Belhaven Beach,” where it flows into the Pearl River."

In addition to Clean Water Act violations posed by the Savanna Street WWTP, the City of Jackson is also failing to comply with the requirements of their MS4 Stormwater permit. The City of Jackson Phase1 Municipal Separate Storm Sewer System (MS4) permit expired on June 30, 2017.  Every city in the US with a population greater than 100,000 people is required to update this permit every 5 years.

According to the 2017 Annual Report, the City is not complying with the following permit requirements:
2018 City of Jackson Sanitary Sewer Overflow Reports