Threats to the Pearl River Watershed 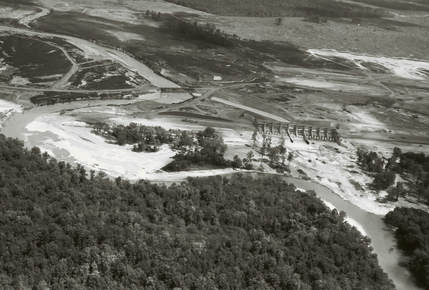 American Rivers listed the Pearl River as number 10 on 2015 America’s Most Endangered Rivers due to the potential destruction that would be caused by the "One Lake" Project.

The Rankin-Hinds Pearl River Flood and Drainage Control District, in cooperation with the Pearl River Vision Foundation, has sponsored a Draft Environmental Impact Statement (DEIS) and design study for a new dam 9 miles south of the current Ross Barnett Reservoir Dam. The goal of this “One Lake” project is the dredging of the Pearl River to widen, deepen and straighten an additional 10 miles of waterway for commercial development opportunities.
​
More information 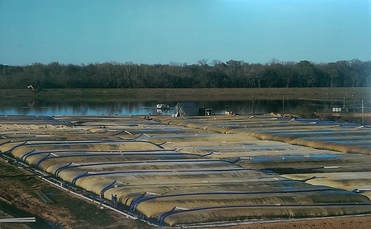 Located on the banks of the Pearl River, the Savannah Wastewater Treatment Facility has a 46 million gallons per day permitted capacity and was placed in operation in 1975.  In November 2012, the US EPA, Department of Justice and Mississippi Department of Environmental Quality (MDEQ) announced a comprehensive Clean Water Act settlement with the City of Jackson for violating Section 301 of the Clean Water Act and conditions of its National Pollutant Discharge Elimination System permits.  The city of Jackson’s violations included 2,300 sanitary sewer overflows, prohibited bypasses, operation and maintenance failures, and effluent limit violations.  The EPA reported that the city of Jackson released more than 2.8 billion gallons of minimally treated sewage into the Pearl River system in 4 years of operations, bypassing treatment at the Wastewater Plant about one day out of every eight. The Consent Degree requires the city of Jackson to pay fines related to the civil penalties and to spend $875,000 on a supplemental environmental project in low-income areas of the city.   The city is required to conduct early action evaluation and rehabilitation of its wastewater and transmission program within the next 18 years, with the majority of the work to be completed in the first 11 years.
In Sept 2016, a hazardous discharge occurred after a levee breach at the Brookhaven Wastewater Treatment Plant.  6 million gallons of storm-water diluted sewage was released into the Bogue Chitto River, a tributary of the Pearl River. ​ 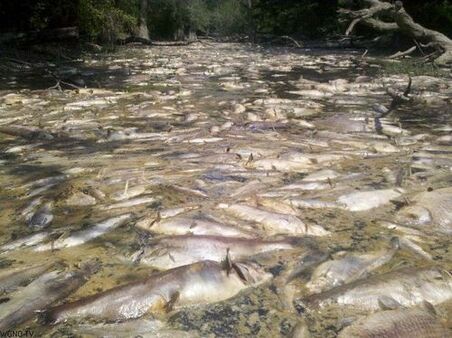 Numerous  industries that affect water quality are located on the banks of the Pearl River.  Scott County, in the upper Pearl River Basin, is the fourth largest poultry-producing county in the United States. Livestock pasture accounts for 24% of the land use in the upper Basin. Cotton, corn and soybeans are also grown in large quantities in farms along the Basin.  Runoff from these farms adds excess nutrients to the water resulting in lower dissolved oxygen levels and other water quality issues including nitrification and eutrophication.   In 2003, MDEQ identified Magees Creek within Walthall County as impaired for bacteria and sediment from agriculture and high levels of fecal coliform bacteria.
The Environment Washington Research and Policy Center listed the Georgia-Pacific Paperboard Mill in Monticello, MS as the number one U.S. polluter of Hydrogen Sulfide to a waterway.  The facility released over 115,457 pounds of pollutant into the Middle Pearl River in 2012 alone.
In  2011, the Temple-Inland, Inc paper mill in Bogalusa, Louisiana, released a high concentration of "black liquor" into the Pearl River, causing a massive fish kill that spread over 60 miles.  An estimated 2 million fish and mussels, including endangered species such as the Inflated Heelsplitter Mussel and the Gulf Sturgeon, were decimated.  Private wells and local water supply along the Pearl River were impacted by the toxins which eventually spread all the way to Lake Pontchartrain. 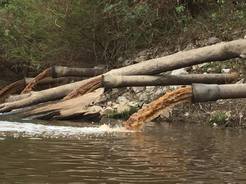 The Pearl River is being impacted by sediment runoff from construction sites around the Ross Barnett Reservoir. Mill Creek, in particular, is experiencing a high influx of sediment due to poor enforcement of home construction regulations.  Mill Creek, which runs to the Pelahatchie Bay area of the Ross Barnett Reservoir, has experienced severe erosion along its banks and requires periodic dredging. ​ 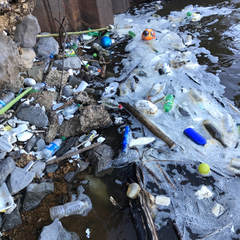 The Pearl River’s proximity to the large urban center of Jackson, MS is having a detrimental impact on water quality due to the large amounts of plastic pollution entering the river through the city storm drains.  A continuous stream of Styrofoam and plastic trash is heading downriver to the Mississippi Sound and the Gulf of Mexico. The magnitude of this pollution is unknown; however, a recent initiative by Take2Miss has shown that this problem is extremely common and worrisome on the watershed.  Recently, closure of a popular fishing spot near the Ross Barnett Reservoir dam has been discussed due to the magnitude of littering.​
​
Low Water Sills/Low Head Dams

Low Water Sills and Low Head Dams are underwater concrete barriers placed along the width of a river to regulate flow, usually resulting in a change in the height of the water level.  These sills/dams are often difficult to detect from up-river and may not appear to be dangerous to boaters or swimmers.  The hydraulic forces and recirculating currents are in fact extremely hazardous and can swamp boats and drown swimmers. CBS News reported: "Since the 1950s, at least 441 people have died at 235 low-head dams in 38 states, according to researchers at Brigham Young University".   A 12-year-old swimmer drowned at the Leake County low head dam on the Pearl River in June 2017.   Even on small rivers, the force of the bankroller created by the sill/dam can trap watercraft and pull boaters underwater even while wearing a flotation device.  Several low head dams are in place on the Upper Pearl River including one south of Leake County Water Park in Lena, MS and another one near the Jackson Waterworks facility.   Extreme caution should be taken when recreating in the vicinity of a sill/dam of this type.
In addition to the drowning hazards posed by the dams/sills, these structures have a detrimental and lasting impact on the ecology of a river system.  In 1935, the  U.S. Army Corps of Engineers (USACE) "Pearl River Navigational Channel" project dredged a 20 mile canal with 3 locks from south of Bogalusa to the mouth of the West Pearl River.  In the 1950s the USACE built 3 low head sills (one at Pools Bluff south of Bogalusa, one at the Bogue Chitto River and one at the spillway) to help maintain water levels in the canal.  Louisiana Department of Wildlife & Fisheries has reported that these sills have "altered the historic migration routes and the overall life cycle of 18 fish species, including the Gulf Sturgeon and Alabama shad".    In 1995, the West Pearl River Navigation Project and associated sills were placed in "caretaker" status and, according to their website, USACE was directed by Congress to use limited funds to maintain the Project in this status.
Throughout the United States, these sills/dams are being removed to allow rivers to resume their natural course.