​Many low-lying City of Jackson neighborhoods are subject to flash flooding during even minor rain events.  This flash flooding is exacerbated by clogged storm drains, drainage ditches and the numerous debris-laden urban creeks that run through the City .   If you continually experience flash flooding in your neighborhood, please report it to Pearl Riverkeeper for mapping.
View larger map
River Flooding 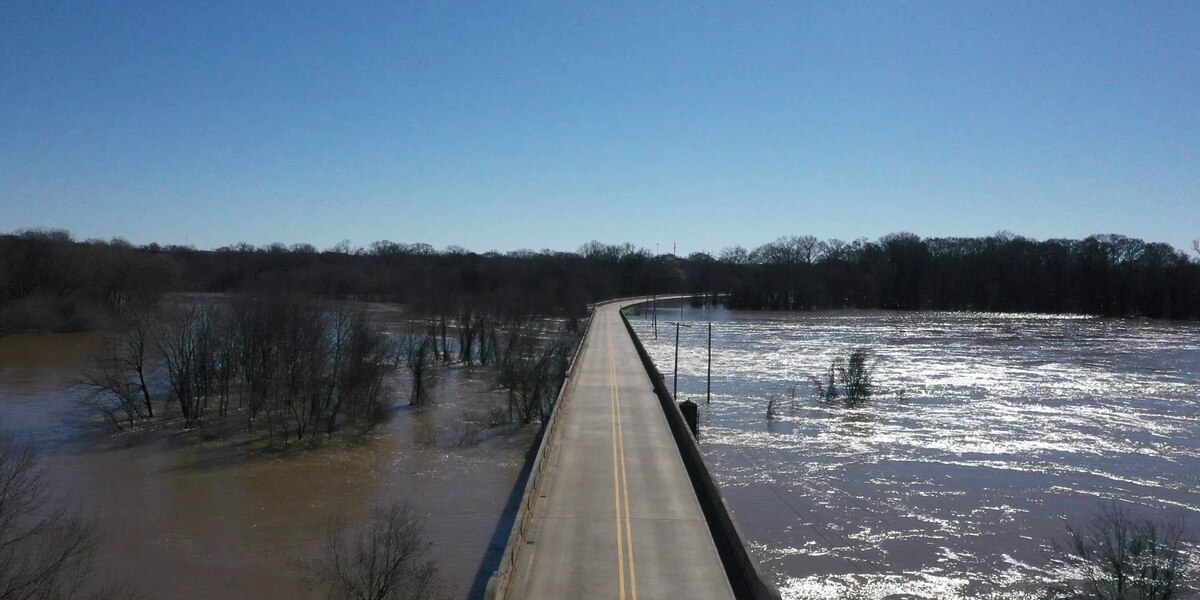 Drone video captures the bloated Pearl River. (Source: WLBT) February 16, 2020
What followed was a frenzy of public and private development in the flood plains of Hinds and Rankin county, with Jackson zoning its entire flood plain for residential, commercial and industrial uses. New highways, bridges, shopping centers, a new water treatment plant, the Coliseum, fairgrounds, electrical substations and homes were all built in the newly "protected" and secure flood plain. ​
Since 1979, numerous Pearl River flood control plans have been introduced.  Originally, flood control plans, such as the Shoccoe Dry Dam Plan authorized by Congress in 1986, and the Comprehensive Levee Plan proposed by the Army Corps of Engineers in 1996,  focused solely on flood control.  Later, flood control plans attempted to leverage economic development opportunities along with flood control, starting with the Two Lakes Plan in 1996, the LeFleur Lakes Plan, the Lower Lake Plan and the  current One Lake Project. ​
During the Feb 2020 major flood event, proactive and deft management of the Ross Barnett Spillway by the Pearl River Valley Water Supply District and its state/federal partners allowed the Pearl River to crest lower than originally forecast.  Still, significant damage occurred in the City of Jackson and in downriver communities.  The federal disaster declaration for the February 10-18 flood event covered 14 counties: Attala, Carroll, Claiborne, Clay, Copiah, Grenada, Hinds, Holmes, Issaquena, Leflore, Marion, Sharkey, Warren and Yazoo. These counties sustained significant damage to public buildings, private homes, highways and roads.

Jackson and surrounding counties need an updated flood mitigation solution, including a moratorium on any continued construction in flood-prone areas.

In 2001, Rankin-Hinds Pearl River Flood and Drainage Control District (also known as the Levee Board) accepted the role of "local sponsor", taking over responsibility for planning and executing flood control projects in the Jackson area.  In February 2020, the Levee Board sent their "One Lake" Feasibility Study/Environmental Impact Statement (FS/EIS) to the Army Corps of Engineers (USACE) for review.  This plan calls for widening, deepening and straightening an additional 10 miles of the river.  USACE will review the FS/EIS for Policy and Legal compliance, and if all policy and legal guidelines are met, the FS/EIS will be sent to Federal and State Agencies for review. At that time the FS/EIS will be published for a public comment period.  ​USACE will prepare final recommendations and conditions based on State/Federal/Public and USACE review and then the Assistant Secretary of the Army (Civil Works) will make the final determination to accept or reject the "One Lake" plan.